To share your memory on the wall of Stephen \"Steve\" Fehr, sign in using one of the following options:

To send flowers to the family or plant a tree in memory of Stephen "Steve" Scott Fehr, please visit our Heartfelt Sympathies Store.

Receive notifications about information and event scheduling for Stephen "Steve"

We encourage you to share your most beloved memories of Stephen "Steve" here, so that the family and other loved ones can always see it. You can upload cherished photographs, or share your favorite stories, and can even comment on those shared by others.

Posted Jun 20, 2020 at 05:41pm
I remember the first time I met Steve. It was also the moment I became his sister-inlaw. My sister Sandy brought him home as her husband to meet the family. Whenever I think of my brother-inlaw, I picture him with that twinkle in his eye, wonderful laugh readily on his lips, as he thoughtfully smooths his beard. In the early years at Delville, I had many an opportunity to swim in the creek and seek out Steve's rock. He would always want to share it with me and others; it was a proud landmark of one of the many things that brought Steve joy --- sitting on his rock in the middle of the creek, wearing his fishing hat, and sipping a beer. But it brought him even more joy to share his discovery. Other joys he loved to share were his action photography and nature shots. He had quite the eye for pictures and the talent to capture the frame. I also valued his hobby and efforts to scan old family photos and sit with my mom, his mother in-law, putting captions on the pictures so we wouldn't lose that history of ours. One of his (many) projects/hobbies/distractions was to interview the hikers as they came off the Appalachian Trail. Delville PA was considered the midway point, and the local Dellville Pub the perfect place to meet and interview hikers as they came off the trail to rest. I never had the opportunity to read the book he created from these interviews, but hope my sister has a copy that she can share. It was a huge undertaking and impressive accomplishment. Steve was a man of many hobbies, each sequentially undertaken.
As is the nature of our family, we sometimes go years between visits, so I've yet to absorb that I won't see him again. Ever. I know when we come out of this isolation and pandemic and I can go about the country again and visit family, the loss that is now will be felt more painfully then. I love you Steve. I will miss your smile and you. Sharon
Comment Share
Share via: 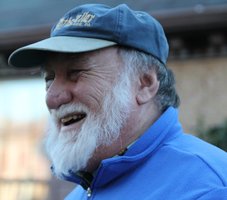