To share your memory on the wall of John Chappell, sign in using one of the following options:

To send flowers to the family or plant a tree in memory of John Wade Chappell, please visit our Heartfelt Sympathies Store.

Receive notifications about information and event scheduling for John

Posted Jul 20, 2020 at 09:28pm
I learned so much from Gentleman John including how to listen which was an easy lesson coming from the Master. We miss him and I in particular his witty insights over long luncheons. Bob
Comment Share
Share via:

Posted Aug 14, 2019 at 04:11pm
John was a man of integrity. I appreciated his humor, friendship and faith . He was loyal and loved his wife and daughter very much. His boyhood church Rosemont will miss him very much. Love to dear wife and daughter...Rev. and Mrs. Mark T. Gorgans
Comment Share
Share via:
MK

Posted Aug 06, 2019 at 05:15pm
I am so sorry to hear of John's passing. I met him through the Masons, and enjoyed his company at my New Year's Eve parties, and also learned a lot from him about the transportation issues in Hampton Roads. He will be truly missed. My deepest condolences and love to his whole family.
Comment Share
Share via:
BP

Posted Jul 28, 2019 at 04:51pm
I worked with John at PaineWebber. He was always a guy who cared about people. He had a bright view of the world. He loved his family and friends. John was a true professional.
Comment Share
Share via:
KT

Posted Jul 27, 2019 at 10:55pm
I did not know John very well, but I have met very few men in my life that I could best describe as a “gentleman”, but John was one of them. I know he will be missed.
Comment Share
Share via: 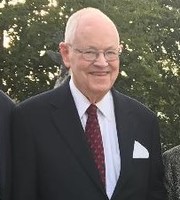