To share your memory on the wall of George Overton, sign in using one of the following options:

Due to heighten COVID19 restrictions, a celebration of George’s life will be held in the fall. To leave a condolence to his family, please visit www.grahamfuneralhome.com.
Read Less

Receive notifications about information and event scheduling for George

There are no events scheduled. You can still show your support by sending flowers directly to the family, or planting a memorial tree in memory of George C. Overton.
Plant a Tree

We encourage you to share your most beloved memories of George here, so that the family and other loved ones can always see it. You can upload cherished photographs, or share your favorite stories, and can even comment on those shared by others.

Posted Jul 29, 2020 at 04:28am
He was such a great neighbor, for my boys and myself. Always ready to lend a hand, answer one of my millions of gardening questions. Generous with his cucumbers too. He will be missed. Stephanie Denmyer
Comment Share
Share via:
B

Posted Jul 28, 2020 at 06:49pm
Lynda, I’m so sorry to hear of your Dad’s passing. Cliff and I will keep you and your family in our prayers. Kathy Biers Doxey.
Comment Share
Share via: 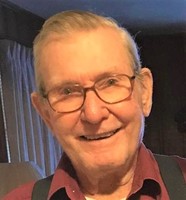