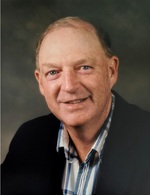 William “Mike” L. Ingersoll, 79, passed away peacefully at home on Wednesday, July 24, 2019. He was born in Westlake, Ohio to the late Lester and Mae Ingersoll. A sister, Zoah M. Ingersoll, preceded him in death.
Left to cherish his memory are his wife, Roma; his daughter, Zoah J. Ingersoll; his son, Michael Ingersoll and wife Celine; his daughter, Mary Bush; and five grandchildren: Brandon and Brian Turner, Eric, Chelsea, and Carrie Ingersoll.
He will be missed for his love for family, sense of humor, and passion for golf. He was a founding member of Greenbrier Country Club where he had many friends.
Mike Ingersoll retired after 29 years of service from the Immigration and Naturalization Service as a Special Agent in Norfolk, having previously served in the U.S. Border Patrol on the Texas, Arizona and upstate New York borders.
A celebration of Mike’s life will be held at 1 p.m. on August 10 at Graham Funeral Home, 1112 Kempsville Rd., Chesapeake, Virginia. The family will receive friends following the service at a reception at the funeral home. In lieu of flowers, memorial contributions may be made to the American Cancer Society. Please visit www.grahamfuneralhome.com to leave a note of condolence to the family or view the ceremony live if unable to attend.