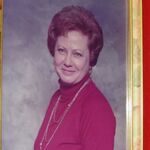 Sally Josephine Akers Allen, formerly of Bristol, VA passed away peacefully in her sleep at Chesapeake Health and Rehabilitation Center on Sunday, December 13, 2020. She bravely endured Parkinson’s and Alzheimer’s for many years. Sally was born in Williamson, WV on May 11, 1939 to Corbin Akers and Mary Akers Poff. She was preceded in death by her husband Richard Allen in 2008 and her former husband Charles Jackson in 1990.
Sally is survived by her daughters Deanna (Doug) Rothhaar of St. Charles, MO and Valerie Jackson of Chesapeake, her grandchildren Drew Rothhaar of Las Vegas, NV, Daurie (Jordan) Bogart of St. Louis, MO, Daniel (Emily) Rothhaar of Nashville, TN. She is also survived by her sisters Dolores (James) Edmondson of Christiansburg, VA and Brenda (Charles) Hutzler of Dry Prong, LA, and many nieces and nephews who loved her. Her siblings Norma Jean Lichty, Donald Akers and Mary Frances Cox were waiting to greet her as she joined them with The Lord.
Sally was an expert at crochet and blessed us with many beautifully crafted afghan blankets. She enjoyed working several retail associate jobs, singing in the church choirs during her years in Roanoke, VA and was a good, caring friend to several dear ones as they endured their final days of life.
Deanna and Valerie are eternally grateful to the staff at Chesapeake Health for their sweet care of Sally. She was quite popular there and Shelley, Brandy, and all the Unit 2 nurses and other staff are forever our family, too.
There will not be any calling hours or services at this time. She will be interred later next to Richard in Bristol, VA. The family appreciates contributions to the Alzheimer’s Association or Samaritan’s Purse in memory of Sally.