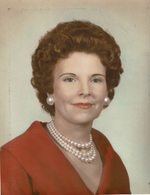 Rebecca Lucille Harris passed away peacefully on September 13, 2020, at Sentara Oak Grove Nursing Center, in Chesapeake, Virginia. One of nine children born to the late Fred and Ida Philyaw, "Rita," as she was affectionately known and referred to by family and close friends, was born on April 24, 1927, in Caldwell County, North Carolina. Upon completing her education in Lenoir, she would become a young military wife, marrying her childhood sweetheart, William B. "Bill" Church, in September 1945. The post-war years brought the young Navy couple to Portsmouth, Virginia, and Rita would call the Tidewater area home for the rest of her life. During her eleven-year marriage to Bill, Rita gave birth to three children, Bernadette, William Jr., and Denise. Her marriage to Bill ended, she later married William Patrick "Pat" Harris, in February 1958. Her fifty-nine year marriage to Pat, a career Navy Sailor, would bring three more children, Ronald, Toni, and Michael. The family eventually settled in Virginia Beach, where Rita would reside until January 2011. At that time, she became a resident at the Sentara Oak Grove Village Assisted Living Center, where she lived until August 2013, when illness necessitated hospitalization and her eventual move to the Sentara Oak Grove Nursing Center. Pat would eventually join Rita as a resident at the Sentara Oak Grove Nursing facility in 2015.

Like so many Navy wives who came before her had done, Rita quickly learned to be both "Mom and Dad" to her children during the many deployments and extended separations that came with being a Navy spouse. She always accomplished that most demanding set of duties superbly and will long be remembered as a dedicated, loving wife to Pat, and a beloved mother, grandmother, and great grandmother to her six children, twelve grandchildren, and fifteen great-grandchildren. Rita and Pat enjoyed many happy years together raising their children and, eventually, living as empty nesters in the Aragona Village sub-division of Virginia Beach. In retirement, the couple traveled extensively, enjoying the RV lifestyle "on the road," often traveling with good friends and family. They especially enjoyed their frequent trips to Cherrystone, on the Eastern Shore of Virginia, and to Williamsburg, Virginia. Longer journeys to Branson, Missouri, to Pat's birthplace in Arkansas, Rita's birthplace in North Carolina, and to Nashville, Tennessee, were among the many highlights of their RV travels over the years. Rita lost husband Pat to cancer in January 2017. She is survived by daughter Toni (Harris) Whitlinger (George), and sons William B. Church, Jr. (Alice), Ronald Allan Harris, and Gary Michael Harris. Rita was preceded in death by her daughters, Charlynn Denise "Rockey" (Church) Warford (Mark), and Bernadette (Church) Chrysler.

A service to celebrate her life will be held on Wednesday, September 16, 2020 at 11am at Graham Funeral Home and Cremation Services, 1112 Kempsville Rd., Chesapeake. Burial will follow at Woodlawn Memorial Gardens, Norfolk. The family will receive friends at the funeral home on Tuesday from 6-7:30pm. Please visit her Book of Memories at www.grahamfuneralhome.com where you may view the service if unable to attend or leave a note to the family. In lieu of flowers, the family asks that donations in her memory be made to your favorite charity.