To share your memory on the wall of Frederick Weaver, sign in using one of the following options:

To send flowers to the family or plant a tree in memory of Frederick Christian Weaver, please visit our Heartfelt Sympathies Store.

We encourage you to share your most beloved memories of Frederick here, so that the family and other loved ones can always see it. You can upload cherished photographs, or share your favorite stories, and can even comment on those shared by others.

Posted Oct 15, 2019 at 10:00pm
My Uncle Freddy was a kind, loving, generous, and talented man, but I never knew he was such a "ham", as shown in his video! I know that he adored his sisters, Mary Jane and Margaret, as well as his Mother, Mary. As a kid, I used to love spending time at Mamaw's- and Freddy lived with her; we took turns during the summer, my sisters and I, spending a week at a time- and I dearly loved to watch Freddy working out in the garage- it was always filled with boat motors, and other things, that he was working on for other people......his vast array of tools always fascinated me so much, and I learned so much from him, as well as My Dad, about how to use so many tools, and fix so many things.... Freddy sometimes walked to the beat of his own different drum, but was loved by all who knew him. We will miss him, his wit, jokes, and humor, and are grateful to know that Freddy is now in the presence of our Lord and Savior, as well as his Mama, Margaret, and Mary Jane......thanks for the memories!!!!
Comment Share
Share via:
SA 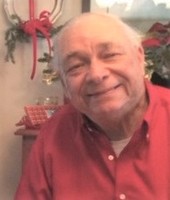